As the market continues to sell off growth stocks that report anything less than perfection during earnings season, it has been particularly eye-catching to see companies post gains after giving an update on their operations. While no single earnings call is typically make-or-break for a stock, a strong report with a promising forecast can be a harbinger of good things to come.

Such appears to be the case for the two financial-focused growth stocks that we will look at today, which not only reported solid earnings but look beautifully positioned to continue building upon their long-term growth stories.

Upstart ( UPST 4.59% ) and its artificial intelligence (AI) lending platform have exploded onto the investing scene since going public in late 2020, offering its banking partners a unique value proposition on credit risk. Driven by its machine learning technology, Upstart aims to disrupt the traditional credit scoring system and “enable effortless credit based on true risk.”

After rising more than 1,000% after its initial public offering, the company has seen its share price drop about 60% from its 52-week highs and has been one of the most volatile stocks in the market. However, from a strictly operational point of view, Upstart has been firing on all cylinders, including a promising fourth-quarter report that led to its share price jumping over 30% in just the last couple of weeks.

Upstart, now partnered with 42 banks and credit unions, more than tripled its revenue and loan transaction volume from 2020 to 2021 — highlighting the burgeoning popularity within its core personal loan operations. Best yet, the company showed its incredible profitability potential, recording a profit margin of 16% during 2021.

What makes this profit margin all the more impressive is that its personal loan operations have yet to reach peak efficiency and could continue to improve as Upstart fine tunes its AI and machine-learning abilities. The company has also begun dipping its toe into automobile lending, which has weighed on margins as it scales up.

Ultimately, Upstart’s market capitalization of $11 billion barely accounts for the $6 trillion target addressable market (TAM) the company has its eyes set on over the very long term. Thanks to this TAM and Upstart’s expansion into auto lending and potentially mortgage lending down the road, I believe its fourth-quarter results could be the first chapter in a long-term growth story.

A pure-play in the sneakily exciting excess and surplus (E&S) insurance industry, Kinsale Capital Group ( KNSL 2.45% ) has quietly become one of the most consistent and fastest-growing stocks in the financial sector. Averaging a 39% annualized sales growth rate over the past five years, Kinsale has proven its exclusive focus on the E&S niche of insuring high risk businesses other insurers pass up to be more fruitful than its more diversified peers’ operations over that time.

Better yet, earnings per share grew by an even higher 55% annually over the same time — driven by its unique focus on smaller accounts in E&S and an improving cost structure via its underwriting technology.

In fact, as the table above shows, Kinsale’s earnings-per-share (EPS) growth accelerated in 2021, spiking to an incredible 82% increase year over year. This jump stemmed from Kinsale posting a tremendous 75% combined ratio, which is a metric used to show the overall profitability of an insurer.

A combined ratio below 100% shows profitability, making its mark of 75% outstanding — especially considering that Kinsale’s peers have historically averaged closer to 96% on this metric, which measures how much in premiums are paid out as claims and other expenses. With only two of Kinsale’s peers writing more than 50% of their premiums in the E&S market, let alone focusing exclusively upon the niche, it is clear to see that the company’s specialization is paying dividends. 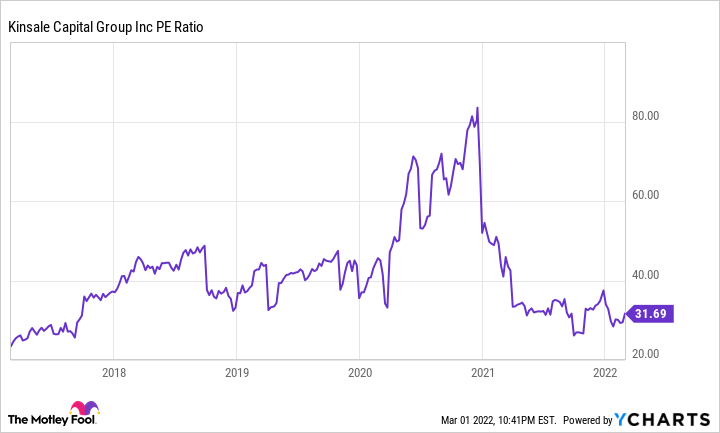 Thanks partly to its rapidly growing EPS, Kinsale now trades at a discount to its historical five-year price-to-earnings (P/E) average. While EPS growth of 82% will probably not be repeated in 2022, Kinsale’s five-year annualized growth rates on both the top and bottom lines make its P/E of 32 look cheap.

This article represents the opinion of the writer, who may disagree with the “official” recommendation position of a Motley Fool premium advisory service. We’re motley! Questioning an investing thesis – even one of our own – helps us all think critically about investing and make decisions that help us become smarter, happier, and richer.